Imdb Moana There was an error trying to load your 'seen' titles. Now I have seen the film and I come to know why. Most of the film takes place in the sea sailing around fighting evil force to break the curse.

But at the end, you would feel this kind of story is not worth for a feature film. It looks a perfect short animation theme.

Disney never disappoints its fans, well, for me. So I en View Edit History. Login to edit. Keyboard Shortcuts.

Login to report an issue. You need to be logged in to continue. Click here to login or here to sign up. We use cookies to help give you a better experience on TMDb.

Rate And Review Submit review Want to see. Super Reviewer. Rate this movie Oof, that was Rotten. What did you think of the movie?

Step 2 of 2 How did you buy your ticket? Let's get your review verified. Fandango AMCTheatres. More Info.

How did you buy your ticket? View All Videos 5. View All Photos Movie Info. An adventurous teenager sails out on a daring mission to save her people.

During her journey, Moana meets the once-mighty demigod Maui, who guides her in her quest to become a master way-finder. Together they sail across the open ocean on an action-packed voyage, encountering enormous monsters and impossible odds.

Along the way, Moana fulfills the ancient quest of her ancestors and discovers the one thing she always sought: her own identity.

The visuals are stunningly beautiful, the songs catchy, the characters lovable. All this plays together so well, you don't even notice that the story is mostly put together of the usual chosen one tropes.

Still, the film's beating heart is so huge that it easily sways you to have a wonderful time, no matter your age. Jens S Super Reviewer.

Mar 15, What a delight! Great character design, insidiously catchy music, crackling sense of humour and a story that's timelessly elegant in its simplicity.

Jul 17, Great Disney movie, the kind that gives you nostalgia for the ones of old. This is a disney character that really does it on her own, great story and concept.

The music is fun, inspiring, and moving at just the right moments, everyone should enjoy this movie.

Jarrin R Super Reviewer. Jun 22, I feel I should make it obvious for my new Letterboxd friends, even though I've already gone over it on several of my reviews on Flixster, but I've never been a big Disney fan.

And I mean Disney the corporation, I've enjoyed many, many Disney movies and will continue to enjoy them for as long as they are good.

The problem I have with Disney is their desire to own absolutely everything under the sun. I hate their attempt at a monopoly.

What else could they possibly own under their massive umbrella? Their monopoly pisses me off and it limits creativity in that everything that anyone creates has to pass the Disney seal of approval.

This brings us to their non-Pixar animated films. Most specifically, their 'princess' films like Tangled, Frozen and this one. Admittedly speaking, however, Moana tells the story of the daughter of a chief, who's also the heir to the throne as it were, and not your typical princess film.

Anyway, what I mean to say is that these films follow the same fucking formula of songs, comedy and overcoming some sort of obstacle that has the lead finally achieving their goal or becoming the person they were meant to be.

And, as good as Moana is, it is still a Disney movie. There's no real innovation in storytelling, animation or its music. I have to applaud the filmmakers and writers of the film for shifting focus and focusing on Polynesian mythology and characters.

That offers a fresh angle for them to tell their story and show a spotlight on a culture that most Americans simply aren't familiar with.

If this movie inspires someone to educate themselves on a culture they don't know about, then mission accomplished. Having said all of that, this is still very much a Disney movie and I think that sort of limits its effectiveness.

Pixar's films work better in that, while they're still Disney movies, they still work out of Disney's limitations. They tell the stories they want.

But I digress, as much as I find that this movie fits exactly into the formula Disney has 'perfected', I still thought that it was a very good movie.

Unlike Frozen, which had a disproportionate amount of songs when compared to its story and how that ruined the effectiveness of the story they were telling.

This movie has a good enough number of songs that it does't feel like they're the entire movie and there's no story to speak. I'd say maybe there's about 5 or 6 of them.

It's a predictable Disney song. It's not bad, it's just predictable. I think every other song in the movie, particularly Tamatoa's the giant crab song is probably the best of them all.

But, taking into consideration the fact that they're using Polynesian culture as their inspiration, there's not as many songs inspired by their tribal music as you would expect.

But, regardless of that, I do think that they find a happy medium. They have their songs and all that, but they never come at the expense of telling a story.

And the story is a good one, for sure. Moana wishes to help her people from this blight that is killing off the vegetation. To do this she must find this demigod and get him to return this relic that he stole from this goddess.

Once she meets this demigod, however, she is thrown off by how much of a selfish asshole he is. Oh, I also forgot to mention that Moana herself was chosen by the ocean to complete this quest.

I do think that this is when the movie really starts, once Moana and Maui find themselves on their journey to retrieve Maui's magic fish hook which allows him to shapeshift and to return the relic.

I will say that Maui is a pretty damn entertaining character and he's certainly one of my favorite parts of the film.

But, obviously, there's more to him than meets the eye and there's a darker past that's explored during the more serious moments.

One of the film's biggest themes is the fact of being who you're meant to be. Moana struggles because she feels, despite not saying so outwardly, that she is not prepared for this task and how her decisions, or mistakes, could lead to the death of her people.

She struggles with that whenever she encounters bumps on the road. I thought that was well done, even if there's no real originality, but at least it gives the character a little more depth than just wanting to save her people.

The animation is absolutely stunning. I do think that this is the best animation Disney Animation Studios has ever created. I think there's a lot of freedom with it considering where it's set and the fact that it's dealing with Polynesian mythology.

The voice acting is tremendous as well, I can't think of any weak links in here, but The Rock stole the show with his character, at least to me. I don't know what else I can say about this movie.

There's this really cool action scene that had me wondering what a Mad Max movie set on the ocean would look like. It's the scene with the kakamoras the humanoid coconuts who have these DIY ships.

In fact, the entire scene was constructed as an homage to Mad Max: Fury Road. It shouldn't surprise you to know that this scene was, probably, my favorite in the entire film. 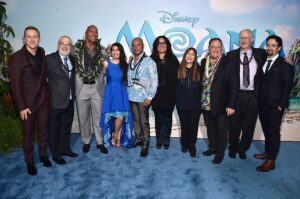